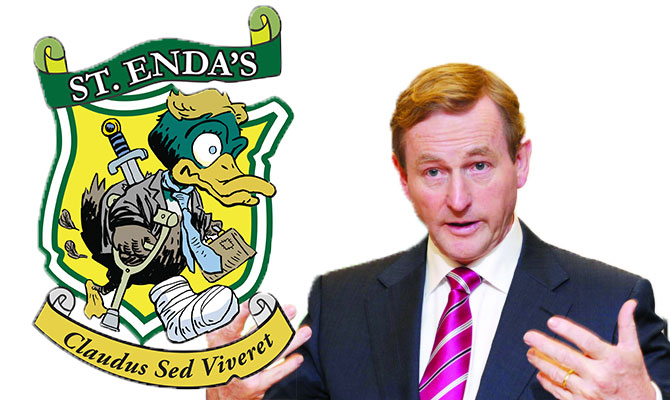 A message from the Principal 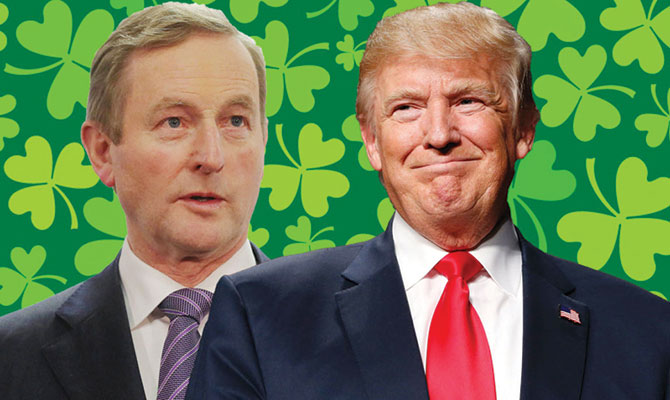 Flying into the US last week, I passed the Statue of Liberty with its famous inscription: “Give me your tired, your poor, your huddled masses yearning to breathe free, the wretched refuse of your teeming shore.”

Americans seem to have forgotten that message lately. So in my own humble (and yet courageous) way, I decided to remind them of it during my visit to Mr Trump.

Of course, I had to deliver another message too on behalf of St Enda’s. Roughly speaking, it went as follows: “Leave me your rich, your entrepreneurial, your hidden profits yearning to be tax-free, among the wretched ethics of our teeming off-shores.”

But that was between the lines, designed for only Mr Trump and selected others to hear. Luckily, the local media didn’t notice it and focused instead on my performance as the immigrants’ champion.

Speaking of which, my announcement of a school referendum to allow our overseas alumni a vote in future elections for honorary president seems to have gone down well, too. It’s not like it would cost us much, anyway. The role is purely honorary.

But when Yanks hear the word “president”, they think it means something (hilariously, they also think Irish “senators” are important people). So they were suitably impressed by my plan to let the wretched refuse, etc, a say in elections.

The bowl of shamrock was also well received. As for the bottom line of my visit – continued sponsorship of St Enda’s by rich Americans, including Trump himself – I’m fairly confident that I struck the right balance between the “sham”, as it were, and the “rock”.

In any case I have been re-energised by the trip. And yes, as promised, I will soon clarify my intentions vis a vis a timetable for stepping down as principal. But I know that all of you, especially Leo and Simon, will also be delighted to hear that my batteries are now fully recharged and that I am more ready than ever to tackle the many challenges facing us in the weeks, months, (or who knows?) that I have left.

The upcoming schools sports has become mired in controversy after Mr Varadkar questioned training methods used in the eagerly awaited teachers’ egg-and-spoon race, for which Mr Coveney is the favourite.

The row centres on Mr Coveney’s alleged use of a silver spoon, and his technique (according to Mr Varadkar) of carrying the silver spoon in his mouth at all times. Mr Varadkar said this highlighted the need for competitors in the event to reveal details of their financial backing.

After checking the rulebook, however, adjudicators found there was no reason competitors could not have silver cutlery, in their mouths or otherwise. And welcoming this judgment, Mr Coveney suggested the objections had been designed only to draw unwelcome attention to his wealthy background.

But it’s understood that Mr Varadkar was in turn annoyed by recent commentary in the local media relating to another scheduled event in the sports-day: the sack-race doubles. A source close to the camp blamed Coveney supporters for press stories making an issue about Mr Varadkar’s partner. “Who Leo is in the sack with is nobody’s business,” the source said.

Stories from the life of our patron saint: No 94 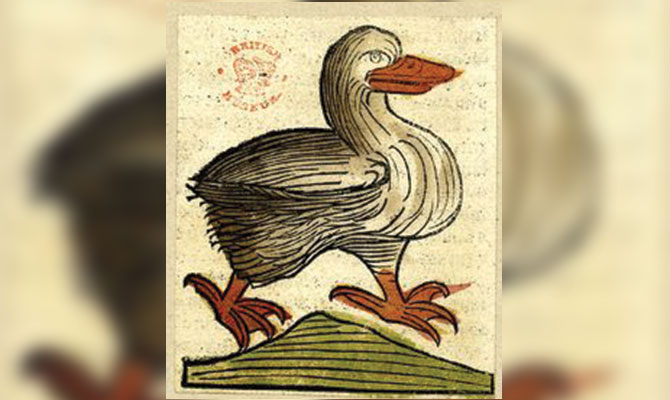 In the spring of the year 517AD, when he was very old, St Enda told his followers his final days were approaching. And so saying, he went into the wilderness to pray.

There was great sadness among his community but also some excitement as the more ambitious young monks competed to inherit his spiritual leadership, with a majority of supporters appearing to favour Simon “the steadfast” over Leo “the loopy”.

When some weeks had passed without the holy man’s return, the community prepared itself for the worst. But one day, a duck with a halo appeared in the monastery farmyard. And when it was seen to be a lame duck, the monks knew Enda had returned.

“Are you dead or alive?” they asked him, reverently. But the duck’s answer was cryptic. “As long as troubles beset the land, I will always be with you,” he said. And then, temporarily recovering from his lameness, he flew back into the wilderness (or possibly Mayo).

Great was the rejoicing among the community that Enda had not yet forsaken it, although great also was the confusion about what exactly he meant when he said he would “always be with” them.

Some, however, feared the work of the devil in the apparition. And according to the annals, it was at around this time that either Leo or Simon, or both, first preached of the necessity for a policy of shooting all ducks on sight. 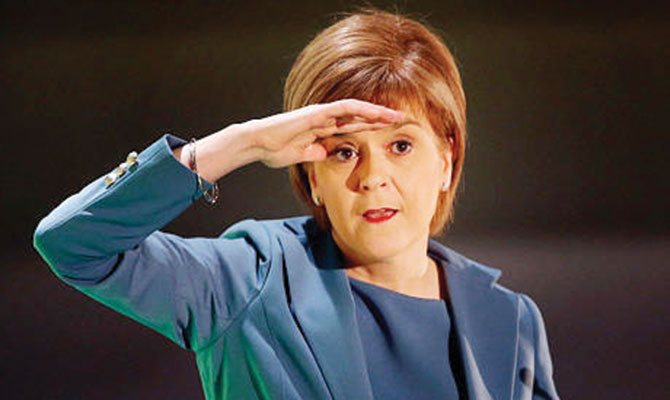 Our neighbouring campus, Teresian School, has again been thrown into utter confusion after one of its constituent colleges, St Andrew’s, announced plans for a mass sitting of the repeat Leaving Cert next year.

St Andrew’s principal, Ms Sturgeon had been publicly unhappy about the results of the original Leaving Cert exam, held in 2014.

But the timing of her announcement has caused grave embarrassment for Teresian head Mrs May, coming just as her entire campus was given an F-minus for its performance in the prestigious Brexit Baccalaureate, during which they were unable to answer even the simplest questions on the paper.

Mrs May’s plans had already been complicated by the recent collapse of the assembly hall in Stormont Academy, where reconstruction is to take several months.

St Enda’s is now considering the erection of a giant screen between our campus and Mrs May’s, to prevent the ongoing circus over there distracting our students from their studies.