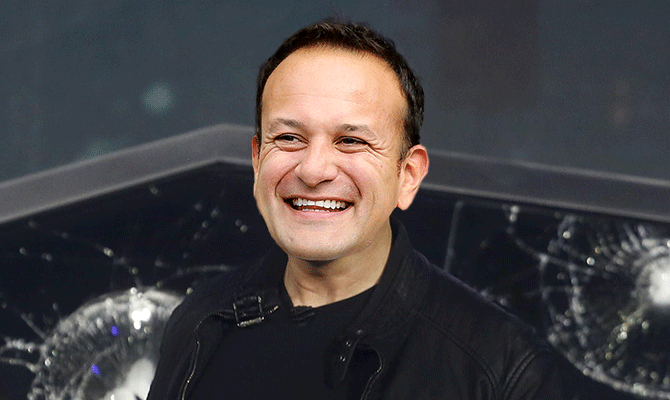 Serious questions have been raised about Blueshirt Inc chief executive Elon Varadkar’s future at the helm of the company after an embarrassing gaffe at the launch of one of his brand new, hi-tech candidates. After criticising his rivals for their faulty products, Varadkar was left red-faced when a public demonstration went badly awry.

For weeks, Blueshirt Inc had boasted of its modern, reinforced, bulletproof candidate line, which was supposed to withstand all manner of pressure and stress. But, much to Varadkar’s embarrassment, the candidate proved to be completely cracked.

In front of the assembled journalists and members of the public, one simple stress test was enough to shatter it into a million pieces and, with it, much of Varadkar’s credibility. It comes hot on the heels of a separate PR disaster for Blueshirt Inc, when its Bailey candidate line turned out to be similarly accident-prone.

Almost overnight, Blueshirt Inc’s share prices tumbled by 2% and Varadkar’s personal wealth looks likely to plummet as well after he admitted that his company had no formal process for vetting its products.

It’s the latest in a long line of public embarrassments for the publicity-hungry, novelty sock-wearing CEO, who has developed a reputation for eccentric public behaviour.