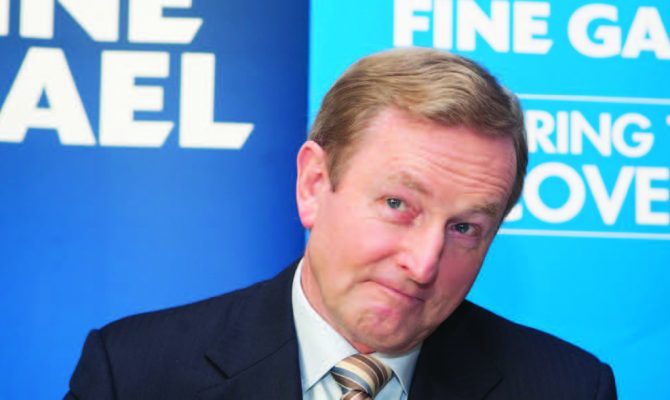 Scene 1: Labour Headquarters. The party leader and her deputy hold an emergency meeting on climate change.
Joan Burton (studying documents): If these predictions are correct, we’re looking at a disaster.
Alan Kelly: Yes.
Burton: With rising levels of militant left-wing opinion everywhere, more than half the party’s TDs could be under water come election day.
Kelly: We’ll be lucky if it’s only half.
Burton: Alex White’s a goner, either way. And Sean Sherlock. And Michael McCarthy.
Kelly: Yes – it’s tragic.
Burton (eyeing him sceptically): Even though they’re all your potential rivals whenever I step down?
Kelly: That hadn’t occurred to me. Joan. As you know, the Labour Party is in my DNA. Its collective welfare is my only concern.
Burton: Yeah, right. (She studies figures again). Sixteen seats on a good day. Ten on a bad one.
Kelly: That’s what the strategists say.
Burton (folding away documents): Well, you know the line – there’s only one poll that matters. We have to hope these are worst-case scenarios. I’m sure you agree with me that the party could ill-afford to lose such talent as Alex and Sean and Michael.
Kelly (unconvincingly): Of course.
Burton: We need to keep this to ourselves, by the way. Not a word to the media – you hear?
Kelly: Don’t worry. Discretion is in my DNA too.

Scene 2: The Taoiseach’s Office. Enda Kenny reads the newspapers while the portrait of Michael Collins looks on.
Collins: I hear you’re going to a COP-on conference in Paris?
Kenny: It’s called “COP21”, actually.
Collins: Whatever. It’s a bit late for you, but I hope it works. You could do with a bit of any kind of COP before the next election – in case the journalists get anywhere near you this time.
Kenny: The event in Paris is about global climate change – as you well know, Mick. But anyway, I have a bit of local climate change to worry about before I go. This abortion issue is threatening to blow up on me. In the countdown to an election, that’s the last thing I need.
Collins: Abortion! In holy Catholic Ireland? Over my dead body!
Kenny: You are dead, Mick – sorry to remind you. And personally, I was hoping to avoid making any pre-election commitments on the issue. But first I had Calamity James openly defying me. Then when I tried to shut him up, Frances Fitzgerald and Paschal Donohoe broke ranks too.
Collins: Yeah, I heard. And that smart young fella who’s waiting to take over from you – the one with the funny name?
Kenny (mildly irritated): Varadkar?
Collins: Him, yeah. He says you have to take a position too. You know what you should do, of course?
Kenny: What?
Collins: Promise a citizen’s convention – or something like that – after the election, and tell the party they can have a free vote at the end.
Kenny (thinking hard): That might just work. Although it would commit me to a referendum of some kind.
Collins: Yes, but it wouldn’t commit you to anything else. You could keep your options open on the actual issue till you’re safe in power for another five years.
Kenny: You know what, Mick? You’re right. It’s the smart move.
Collins: Ah, it’s just basic cop, really. I hope you learn some in Paris.

Howlin: Alright, I know we’re all annoyed about the leaked internal polls, so I suppose we’d better have a discussion about that. Clearly, it’s a boil that needs lancing.
Voice at back of room: It’s more like an AK47 that needs decommissioning, if you ask me.
Another voice: Yeah. We should put him permanently beyond use – in the middle of the night somewhere, with two clergymen as witnesses.
Brendan Ryan: If we find out that the leak came from a member of party staff, clearly, that person needs to be disciplined. But if it turns out to be a TD or senator, they have to lose the whip.
Alex White: Can I just state on the record that I don’t believe for one moment it was a member of staff.
Pat Rabbitte: Whoever it was displayed appalling lack of political judgement.
Another voice: Yes – it’s not in the Labour Party’s DNA to do something like that. (Knowing laughter, followed by more angry noises.)
Joan Burton: Alright, alright. We may all believe there’s an elephant in the room here. But in fact, there’s not. The elephant is unavoidably absent, I’m told. So until he’s in a position to reply, we need to move on. (The angry noises subside.)
Burton (continuing): Now, how about we discuss my triumph in forcing the Taoiseach into a u-turn on the 8th amendment? (Mocking laughter all round.)

Scene 4: Fine Gael headquarters. Frank Flannery and the Taoiseach discuss election dates.
Flannery: So. We agree that going full term and having an April poll is out of the question. It would leave us hostage to events and we’d have the whole 1916 stuff in the middle of the campaign.
Kenny: Agreed. And of course a late March poll would mean me being away in Washington during the campaign. We can’t do that either.
Flannery (thinking about it and clearly tempted): Hmm…. No, I suppose you should be in the country – somewhere. Just not anywhere near the RTÉ studios. So yeah, it has to be before mid-March.
Kenny: What’s the earliest we could do – end of January?
Flannery: Yes, but that would mean no party conference. And incredible as it seems, we do always get a poll bounce from your speech
Kenny: Then Labour have theirs the week after. We better not mess that up either, even if they are fecked.
Flannery: No. So that narrows it down rather. (He studies diary.) Why don’t we say February 26?
Kenny: Why not.
Flannery (writing it in): Good. Planning will proceed accordingly. But in the meantime, let’s keep this to ourselves. No leaks.
Kenny: Of course. Who do you think I am – Alan Kelly?